﻿(Please see my previous posts so the story makes sense)

In any relationship we have in life it takes effort on both sides to make things work. The same is true when things go bad. I do realize that I played a role in this. I share in some of the blame here. Looking back now, I admit I probably could’ve handled things more calmly. I am not sorry for defending myself and enforcing my boundaries but I could’ve done it in a more toned down and less aggressive way. Anger and impulsivity is something that I’m working on. All in all I have always wondered what the outcome would’ve been had I calmly told my brother I wasn’t returning my dress and I showed up to their wedding with it on. 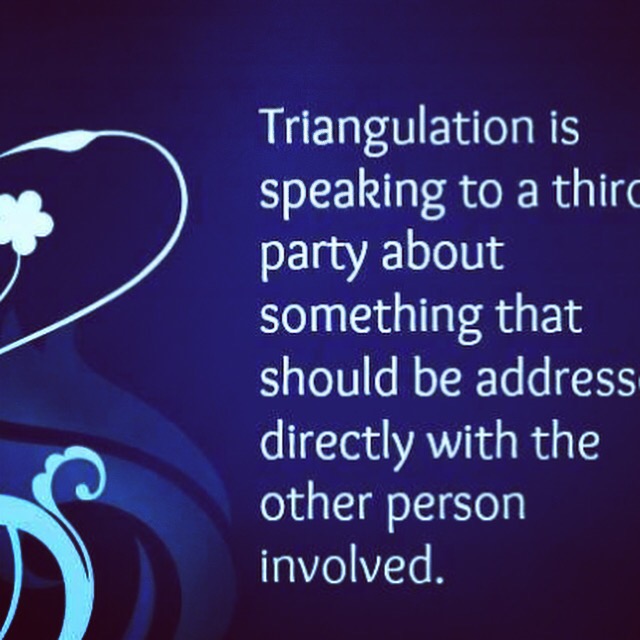 This picture was found on Pinterest I forget where.

I must admit I listened to the recording and analysied the shit out of it. What she was doing was triangulating. According to Wikipedia the definition of triangulation is as follows…..

“Triangulation is a manipulation tactic where one person will not communicate directly with another person, instead using a third person to relay communication to the second, thus forming a triangle. It is also a form of splitting in which one person manipulates a relationship between two parties by controlling communication between them. “

The definition is great and all but let’s delve deeper into who manipulative personalities like to triangulate. What purpose does it serve? To do that we need to visit a sight that I found very helpful as I sorted through all of this, http://www.outofthefog.com. It is a website dedicated to helping those who’s lives have been affected in anyway by a personality disordered human being. In their definition of triangulation it states that the end goal , ” Gaining an advantage over perceived rivals by manipulating them into conflicts with each other.” (You can read a more in depth description here)

“This competitive or “win-lose” attitude occasionally turns malevolent and will lead the person who suffers from the personality disorder to seek ways to sabotage,manipulate or otherwise undermine the position of others whom they see as a potential threat.”﻿

When I look back there had been a few unsuccessful attempts by Satan to triangulate. I believe that early on in their relationship she saw me as a threat. My brother, probably innocently shared some information with her that scared her off and the info he shared had to do with his ex. My brothers ex was cheating on him pretty much from the time they got engaged and the two years that followed. I was on to her very early on. I had noticed a shift in her behavior that had sent off alarm bells. Prior to their engagement my brother’s ex was one of those girls who was constantly talking about getting engaged…almost to the point where she’d humiliate my brother for dragging his feet. She would draw attention to her tingles finger and make comments.
When my brother finally popped the question, her and him had just moved into the same apartment complex that my husband and I lived in. We walked over to their apartment with a bottle of champagne to congratulate them and hear all the details about the proposal. There was a very noticeable lack of excitement from his fiancé. After all the engagement talk we would’ve expected her to be bouncing off the walls with excitement. Something was off that day, though. My brother asked and he said there was a long pause in-between him asking and her answering. In the next few months my mother threw them an engagement party and his fiancé had a complete lack of interest in helping out. In fact, she seemed completely uninterested in the entire party and wedding planning. With the way she used to pine over a ring I seriously would’ve thought she’d be at my house with a stack of bridal magazines, and an organizer/planner the day after they got engaged. My mom and I picked out everything for the party from the decorations to the party favors.

About a year prior to their engagement my brothers ex had started working a new job as a ballroom dancer instructor, for a well known national franchise known as Arthur Murray. In the months preceding to their engagement she left Arthur Murray with her male dance partner, who was opening up his own school. It was a risky move for both. She was dedicating a lot of time to his new school. I mean she was out all hours of the night. From what I knew she was being promised all sorts of things from commissions and bonuses to a share of the business (even though she had no money to invest). Something was just weird. She was putting almost all her energy into this school and she barely making minimum wage. Her Facebook page turned from loving photos of her and my brother to photos of her and her new “business partner” dancing at ballroom competitions. My brother, the wedding and the wedding planning went completely on the back burner. I had tried hint to my brother to look into it but just like he does with Satan, he ignored all the very obvious red flags that something wasn’t right. She was cheating with her business partner.
After my brother had finally woken up and got into her text messages it was quite obvious that she was deep into this affair and it had been going on for a long time. When she left the apartment, she owed my brother a couple of thousand dollars. A lot of that money was due to the fact that she had spent thousands of dollars of their engagement money to pay her bills because she wasn’t being paid well by

her “business partner “. She promised to pay the money back as soon as she got a job. Naturally once the affair was discovered, my brother informed the business partner’s wife (who also happened to be pregnant at the time the affair was discovered) and this resulted﻿ in his ex losing her job. Months had passed and my brother only received $20 of the over $2000 she promised to pay him. She kept telling him that she wasn’t working. She blocked our whole entire family on social media. My brother wanted to know if she was lying about not being employed and so as crazy as this may sound. I put my sleuthing skills to work and made a phony Facebook page for our high school and friend requested her. She totally fell for it hook, line and sinker and we were able to see that she was indeed working and was lying to my brother. He then knew he wasn’t ever going to see that money, and legally he had no recourse because the money was in an account with both of their names on it. Well somewhere along the lines Satan found out about the page, and I’m not sure how but she makes mention of it in the recorded conversation with my mom. The page was made long before Satan was in the picture. I think it really scared her that I was able to trick his ex. If I could trick his ex, I could potentially trick her one day too.

Satan knew from that point on that I was a threat to her. The fact that I was able to figure out his ex long before he did, coupled with the fact that I tricked his ex was enough for Satan to realize that I was someone who could expose her as well. When she got no reaction out of me from her first few attempts to triangulate, she decided to step up her attack by insulting me. She could not risk losing my brother after all the grooming she did.

Stuck at the Great Debate...